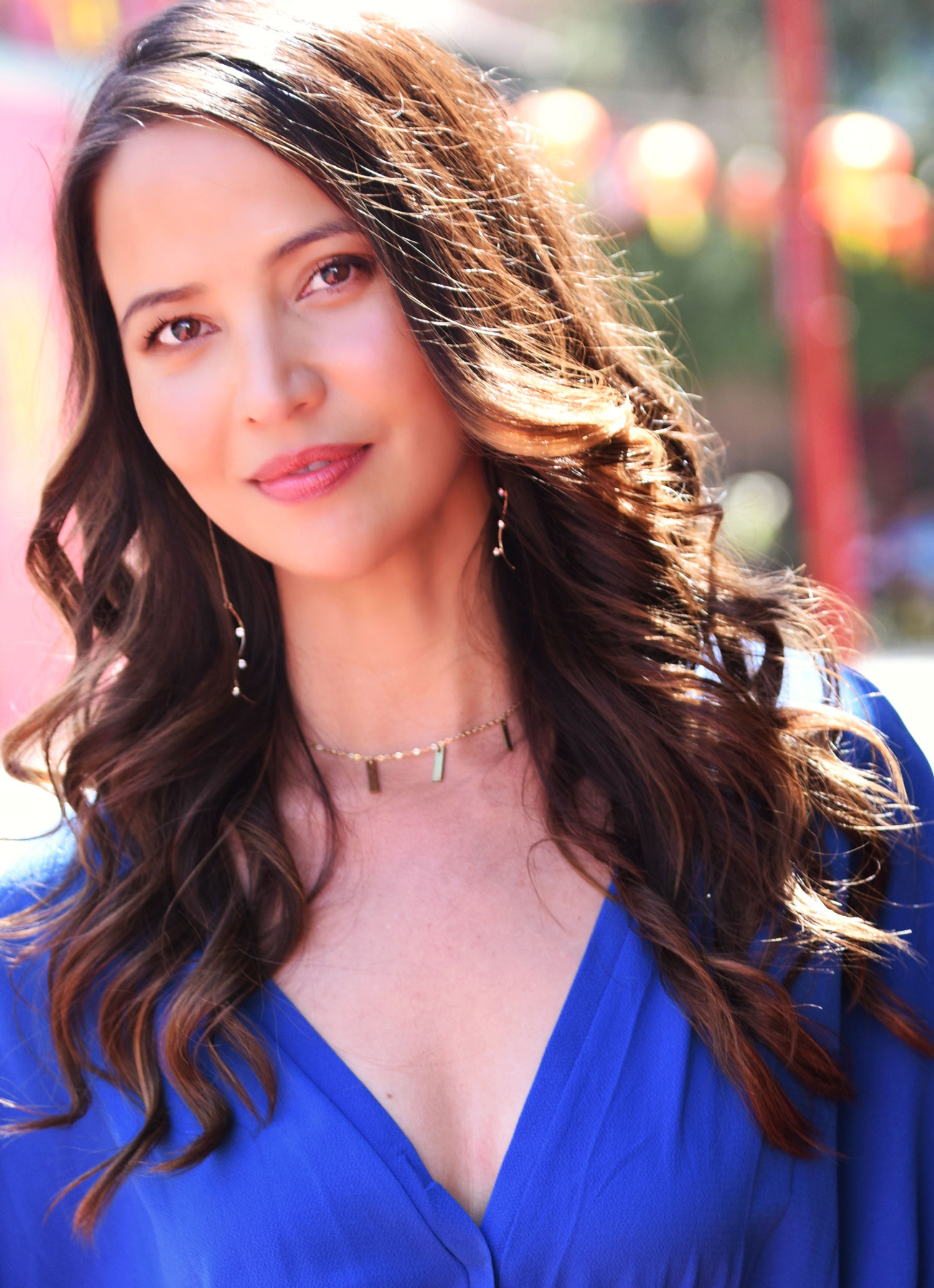 Posted on September 8, 2020 in Spotlight

An artist from a young age, our September Spotlight client Laurine Price started acting as a hobby… until it became her entire life. Over the past year alone, she’s booked guest roles on ABC’s Schooled and a lead in horror/thriller Blood Born, just to name a few. We’re thrilled to chat with Laurine about her career.

1.  Growing up in the D.C. area, you were playing the piano and singing from a very young age. This childhood led you into musical theatre and the world of acting. How do you think this background influenced you?
My grandmother pointed out that I was an artist from a very young age.  She asked my parents to put me in piano, voice lessons, and dance (well, the dance part didn’t happen.  Whoops!).  This has absolutely shaped almost everything I’ve done in my life.  Even having a great job right out of college in an I/T department, I immediately auditioned for community theater and my acting career was built almost entirely as a hobby… until I could commit full-time to my life-long dream of being a creative artist.

2. While you’ve been in many theatre productions, over the past few years you have begun to land bigger roles in TV/film as well. Was this the path you always wanted to take?
I didn’t really plan the path, it evolved pretty naturally.  I was drawn to musicals and classical theater because my parents watched all of the Rodgers and Hammerstein films and my grandmother and I read classical literature.  So it felt natural to do musicals in my spare time.  Early on, an audience member suggested that I sign with their agent (I had nothing to lose, right?), who sent me out for commercials, industrials, and print.  I was blessed to book a lot and joined SAG-AFTRA.  Eventually, I ended up auditioning for the highly regarded London Academy of Music & Dramatic Art (LAMDA), and was accepted into a 13-person class!  With achieving my post-grad degree from LAMDA, the next step was to move to Los Angeles and jump into the film industry.

3. What are the biggest differences for you acting on stage versus on screen? Which do you prefer?
The biggest difference, for me, is delivery.  You always have to be honest playing whatever character you enbody, but on stage I have to project much more.  I was relieved working in stage productions with mics, because then I could sing how I wanted… I could play tender moments naturalistically and softly because the mics could pick up my voice.  And while it’s really fun to throw grand Shakespearean speeches to the back wall (and I will never say no to those opportunities!), I do trust and love the intimacy of film (even if it’s broad comedy, it can still be so intimate).  I really do love both stage and screen for the imaginative worlds we get to create, but having done so much theater – I am now really enjoying the process and extraordinary teamwork of filmmaking.

4. In 2018, you guest-starred in the second season of Ryan Murphy’s American Crime Story: The Assassination of Gianni Versace. What was this experience like? How was it working with Ryan Murphy?
Talk about a perfect marriage of my theater and film experience!  I got to play Dame Kiri Te Kanawa, who Gianni Versace costumed in her role as “The Countess” in a 1993 opera.   Bright/Daniels Casting was looking for an opera singer for the part, and I got the call asking, “Do you sing opera, please say yes?!!”  Thinking that I was going to be sent in to the LA Opera, I honestly responded, “No… musical theater, pop, sometimes can get away with classical…”  They told me that was too bad and they were looking for an opera singer for a role on the pilot of a new series… to which I replied, “Oh… TV-opera????  Let me try it!!”  (Knowing that with effects and editing, it might be a little more enhancing.  LOL!)  Singing my one aria for the audition, I booked the role and was over the moon!

The experience was extraordinary.  The scenes are about Versace and the masterpiece of a dress he made for my character.  I think I had three fittings for the dress (of which wardrobe had to hand-sew all of the intricate designs and patterns to replicate the original Versace gown).  On the day, that specific dress came with two people, as it wasn’t practical to walk in.  The two dressers carried the train and a PA helped me walk sideways to the soundstage for the opera scene. I was set in place, and when I had to move backwards or forwards, three people came to assist!  Standing on the stage of the Orpheum in L.A., in a theater full of audience-extras and the Long Beach orchestra in the pit, was mind-blowing.  However, it was not a new experience as I had performed for two-balcony theaters (1400+ audience) many times in my theater past.

This was Day 1 for “Versace: American Crime Story”, so Ryan Murphy was racing the clock.  However, he is a genius.  He created these scenes that were so easy to get swept up in.  It felt like magic.  He stopped to tell me I was doing great, which I appreciated – as he was literally running around.  The whole experience was transcendent, and remember thinking to myself between takes – “Yes.  This feels perfectly right.”

(And btw – I ended up lip syncing to Dame Kiri Te Kanawa’s track, which was the plan all along! They just needed to hire a legit singer who could fake German and stand convincingly on an opera set.  Most of the audience thought I was actually singing!  Darren Criss came up to me, and whispered, “I may or may not know that you’re really singing,”… and then winked.  Too much fun.)

5. In 2019, you landed a Series Regular role in the series Phoenix for streaming. What has it been like playing Jane Doe?
This series is *awesome*.  It’s high stakes, high suspense, high drama.  We are dropped in the middle of her limping away from a plane crash – so it runs the whole gamut of emotions.  But I am HERE for it!  Every new script I get, I am continually in awe of the turns it takes and am blessed and thrilled that I get to do this.

6. What is your favorite thing about the role? What do you find the most challenging?
My favorite thing about this role is discovering who my character is.  Having lost my memory, my character “Jane” doesn’t know who she is, where she came from, or how any of this has happened.  Discovering and piecing together clues is as exciting on-camera as it is reading the script for the first time and thinking, “Ohhhhh!  Wow!  Didn’t see that coming!” This part is a challenge on the body, as it doesn’t know to separate trauma for the cameras versus real life.  So when I cry, my body thinks it’s actually grieving.  When I’m scared, my body kicks into fight or flight mode with adrenaline and cortisol.  I appreciate the feedback that it’s coming across as honest, but I have to make it a point to enjoy a lot of self-care during days off!

7. Later in 2019, you had a co-star role in an episode of ABC’s Schooled. What was the energy like on set?
Working on “Schooled” was as joyful as the show comes across on TV.  I laughed so hard at the main actors’ deliveries of their lines, their improvisations, as well as their banter.  These are some ridiculously funny people.  Also, the episode I was in was directed by David Katzenberg – who was also way cool.  It was just a great experience, one where at the end of the day you’re sitting on the Sony lot and thinking to yourself, “Huh, that was amazing AND I got paid for it!”  🙂

9. A few features you filmed last year are scheduled to be released soon as well. In Switched (which released September 4th), you play the Mom to the lead role of Cassandra Evans. What was your favorite thing about playing Sarah Evans? What are you most excited for people to take away from the film?
My favorite thing about playing “Sarah Evans”, the mom of the lead “Cassandra” (brilliantly played by Miya Horcher), was that I got to be loving, supportive, understanding, and quirky.  (I mean, C’MON!  lol) She’s also the quintessential Disney/Nickelodeon mom on some levels, but is all heart. I loved it.

The film’s mantra is “Lead With Love”.  I’m excited for this message of loving one another, as it’s a nice reminder in today’s generally disheartening media climate.  It’s light hearted, family oriented, and will make you laugh under the umbrella of its wonderful theme.  I think it gives us a moment to exhale in a difficult year so far.  Another key point is the colorblind casting of Asian American actress Miya Horcher as the lead girl, with myself as her mother and Daniel Chioco as her brother.  Kudos to Lisa London Casting and Mustard Seed Entertainment for probably not even thinking about it, and just doing it.  I have had so many Asian American friends and family say that it’s so nice to see characters that reflective themselves up on the screen.  This is no small thing, and it is so much appreciated.

10. You also had a lead role in the horror film Blood Born which is set to be released late 2020. What was this experience like?
“Blood Born” is a horror film that was an absolute blast to shoot.  The cast and Epic Level Entertainment’s crew became like a family, as we sat in this smoke-filled house for three weeks with all sorts of cool make-up and prop gags.  It’s funny because I don’t enjoy watching horror films (I scare easily!), but I really love making them because the production process is incredible.  Props, effects, stunts, make-up, wardrobe, and a production crew that comes together to pull off the supernatural is astounding to watch and really thrilling to be a part of.

11. What did you enjoy most about playing Cherise?
My character on “Blood Born” was the best friend of the lead, and I was very clear on my motivation – get my friends the EFF OUT of this cray cray.  I loved playing “Cherise” because I was determined, strong, funny, sarcastic, yet clear-minded.  Sometimes it’s really fun to play that gal that shouts, “Can you not SEE what’s in front of you?  Yeah… NAW, we leavin’!!”

12. What does the future look like for Laurine Price?
I am an actress, producer, and super fun creative.  I have a whole white board overflowing with notes for original stories.  I’ve optioned some amazing work and am currently pitching a project that you will absolutely know about a year from now.  And it’s just the beginning of an avalanche of films, limited series, and shorts to come from the mind of me… the little girl that played piano and read Alfred Lord Tennyson with my grandmother.   🙂  Stay tuned!