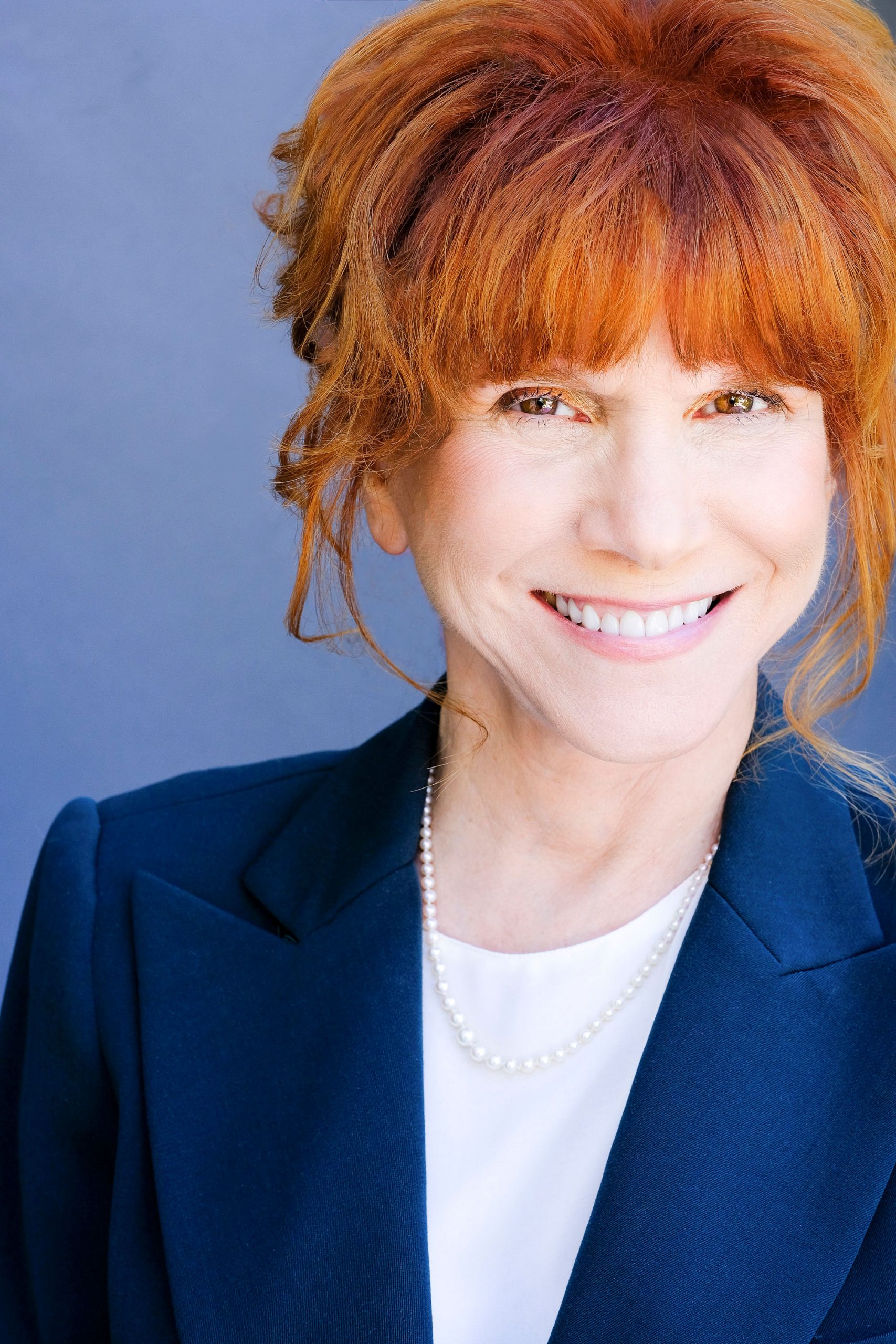 While our July Spotlight Marcie Barkin has a fairly unconventional start in Hollywood, her career and continuous love for the craft has spanned over decades. After a number of roles in hit shows of the ’70s and ’80s, Marcie left the business entirely to create her own computer consulting company. But that couldn’t keep her away long – Marcie returned to acting in the early 2010’s and has been working ever since. We’re so excited to talk with Marcie about her career. 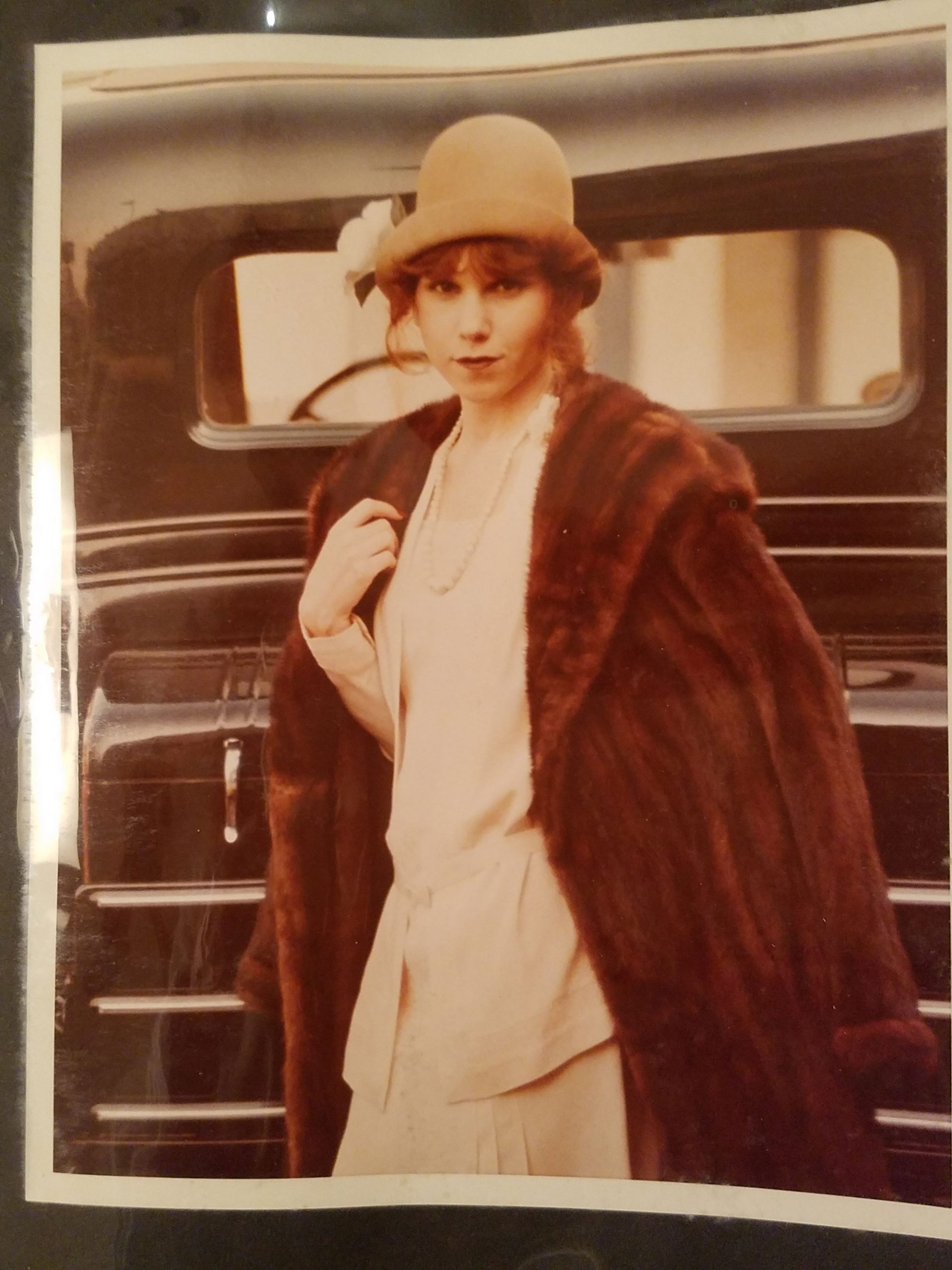 Barkin in the career-starting Chevy commercial.

1. Your start with acting is a little unconventional. Working at an ad agency, when they were unable to cast a Chevy car commercial, you hopped in. Was acting something you had previously been interested in? When did you know you wanted to pursue it?
I never even thought about acting at any point. Painful, short lived piano lessons as a kid stifled interest in any creative endeavor! It wasn’t until I saw myself on the screen in that Chevy commercial that the idea of being an actress occurred to me. I saw someone else up there on the screen – it wasn’t me. That transformation fascinated me.

2. Throughout the ’70s and ’80s you had many recurring roles on hit TV shows of the time – All in the Family, Welcome Back Kotter, Tales From the Dark Side, The Harvey Korman Show, The Facts of Life, etc. What were these like?
Being on hugely successful, well known shows, working with ensembles that were already cohesive and subsequently being recognized for the first time all provided the foundation for a leap in my acting skills and confidence. I became totally at home playing with ‘The Big Boys’, and that shift served me well in all the auditions and jobs that followed. 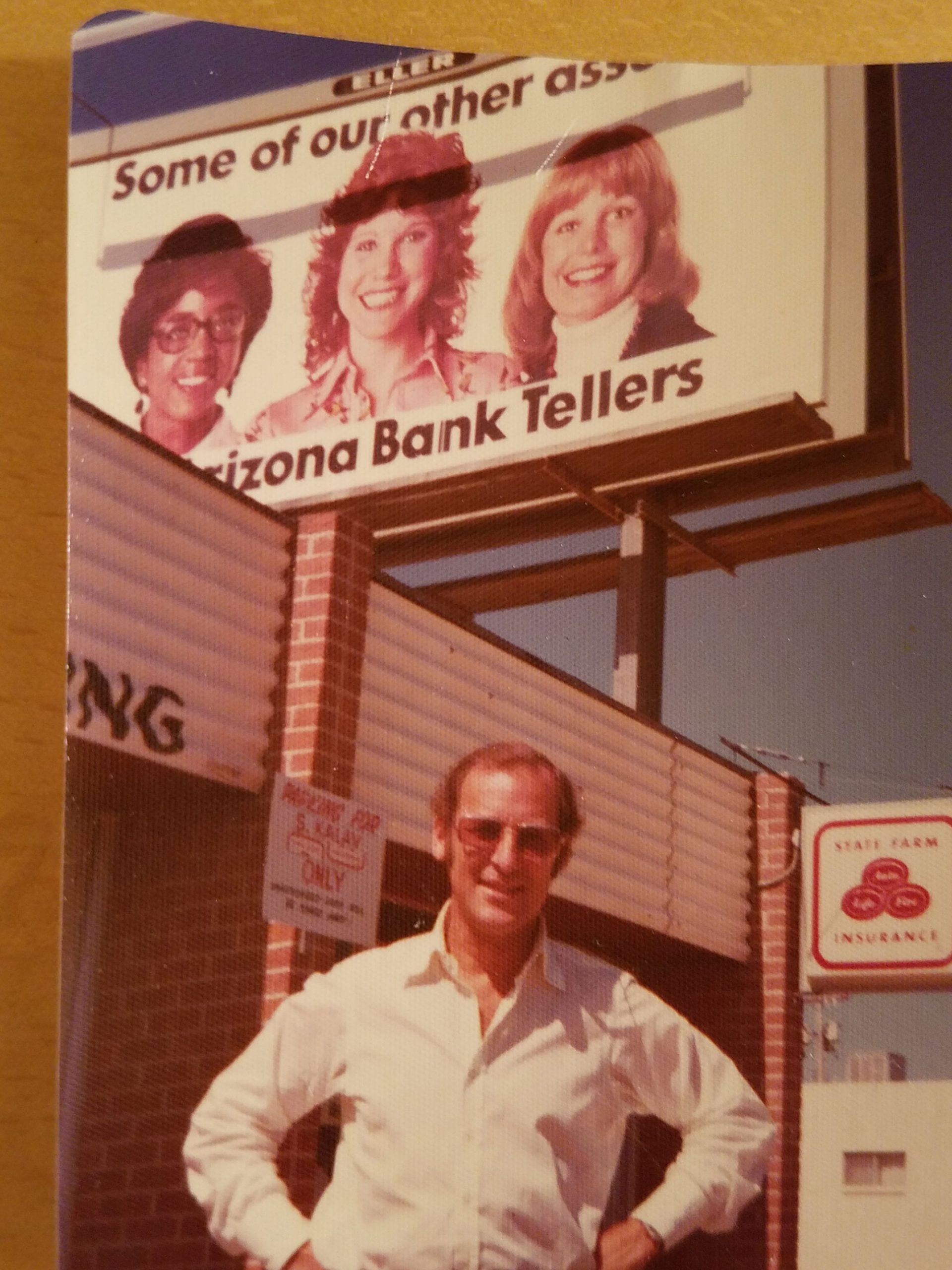 Barkin’s father posed outside a billboard in Arizona featuring his daughter.

3. You also had a recurring role (6 episodes) on Santa Barbara. What was your favorite thing about playing Marcia?
For the first (and just about only) time, I wasn’t type cast as the ‘Best Friend of the Tits and Ass’. I was a BAD GIRL! I was a drug pusher who was trying to re-addict the lead character. The station actually got HATE mail for Marcia which led to more episodes for my character. A quick story – when the show was airing, I went to the Hamburger Hamlet on Sunset for lunch, and the waiter wouldn’t serve me because, as he said, “How could you try to get Gina to do drugs again? SHE’S BEEN THROUGH SO MUCH!” And he stormed off and got someone else to wait on me. Honestly, that’s a true story.

4. You also had roles in a variety of films at the time – The Van, The Boob Tube, Kitty Can’t Help It. How would you describe those experiences?
They were all ‘B’ movies, but ‘A’ experiences… doing all those low budget, independent movies was a mine field of learning. I basically realized that I had to fend for and protect myself – understanding that I had to make my voice heard in the midst of generally inexperienced film makers. Certainly my acting choices were my own as there really wasn’t any direction – you were basically hired based on your audition and they just expected you to say your lines. Those early films gifted me with opportunities to find my creative voice and learn to trust my instincts. 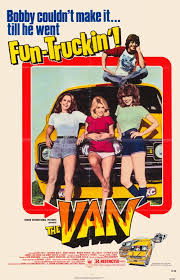 5. Despite early career success during this time, you left the business in the late ’80s to start your own software consulting company. What inspired this change?
I had a mentor at the time who repeatedly discussed the diminishing returns of a woman growing old in front of the camera… back then it was especially true. He saw the statistics and wanted me to have a career that would see me into middle age without the mark of ageism. His intention was sound, as was his suggestion that I go into computers…but it took me years to leave Hollywood. I finally left at the height of my career, kicking and screaming, much to the dismay of my agents and manager. I moved to NY (it was too painful to be well known in LA) and started the very difficult quest of a career in the software industry. It’s particularly gratifying for me to see that now we have women-owned and run production companies, and more women in all areas of film and TV. 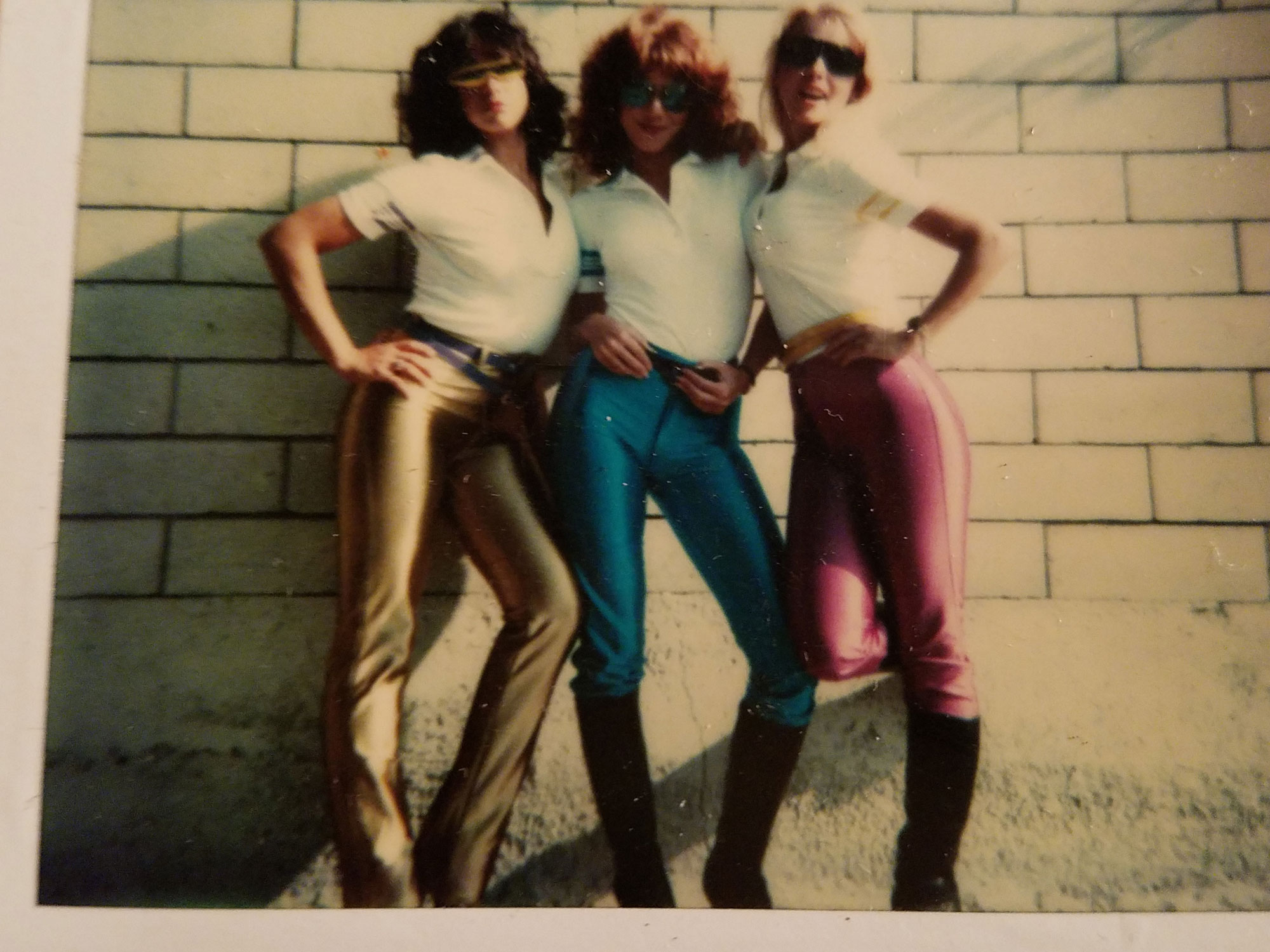 6. During the time at your computer consulting company – How were you able to continue flexing your acting chops?
The truth is, I never stopped acting. Every morning, I would wake up and say, ‘Who am I playing today?’ And then I’d look at my schedule and think, ‘Oh! I’m a corporate professional.’ And I’d lay out the business suit, silk blouse and heels. I always felt as though I was playing the part of a company owner and consultant – it never felt like who I really was, despite all the education, the technical speaking engagements and the meetings with CIOs of billion dollar companies.

7. Regarding your technical background – How has this specific background influenced your acting now that you have returned to the entertainment business? Why did you ultimately decide to return?
Oddly, dealing with all levels of people in corporate America has opened up different, intuitive methods of communication which have enhanced my ability to read body language and nuances of behavior and speech. So I think I’m more aware in my acting now. Also – after developing my own enterprise software product, these enhanced communication skills have helped me sell my product to global companies. The key to selling a product is to sell what you believe in, and certainly as actors, we have to not only believe in ourselves as the product, but we have to believe in and become the person we’re playing.

Why did I decide to return? How could I not? Acting is the only career/expression I’ve ever loved. It’s an integral part of me. I missed acting every single day for the years I was gone. So several years ago, I had a social trip planned to LA…and on a whim, before I left on my trip, I called a casting agent I knew well from the old days. Upon asking him if I could meet with him when I arrived (Wow! He was still in the business!), he said ‘Of course! Where the hell have you been?’ Two days after arriving in LA I had a commercial agent and an apartment… and the rest, as they say in Hollywood, is history. 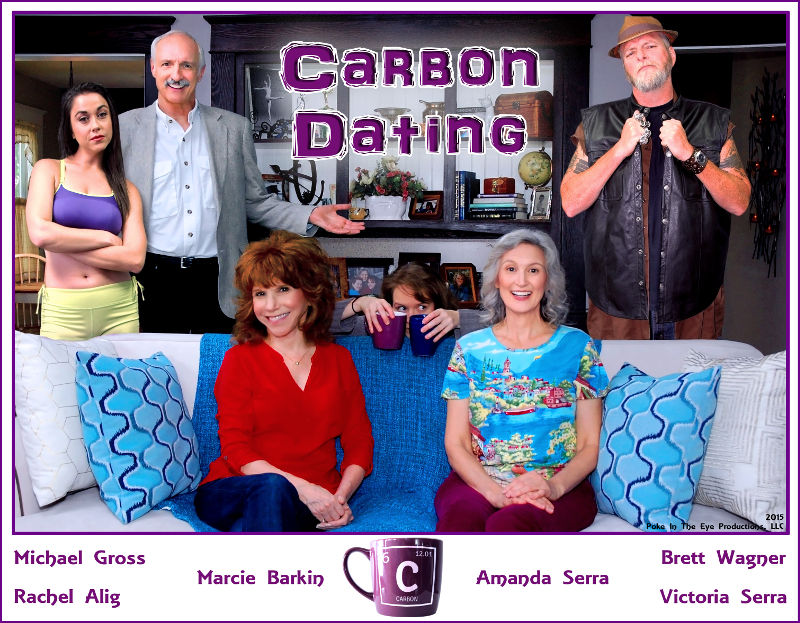 Barkin as Madelyn in Carbon Dating.

8. In 2015, you were the lead (and Associate Producer) in a web series called Carbon Dating. How did you get involved with this? What did you most enjoy about playing Madelyn?
Carbon Dating was unexpectedly born out of a whining conversation with an actress friend in our acting class. I was complaining that I was sick and tired of only playing small parts in web series… I loved the medium and wanted to play a lead! Damn it! But I didn’t write so was relegated to whatever was offered. My friend said, ‘I can write.’ My response was simple – ‘Write us a damn series!’ 2 weeks later she sent me the pilot script and when I laughed out loud, a show was born.

Ah, Madelyn – my polar opposite. Which is why I love playing her. I feel sorry for her – her insecurity, her damaged self-image, her manic desire to be accepted and loved. I love her simmering righteous anger which lives a hair’s breadth beneath the surface. I root for her – I’m her biggest fan. I want her to find herself and not be defined by being someone’s wife or needing to fulfill others’ expectations. I want her to realize she’s wonderful just as she is…if she could just get out from under her deeply bruised ego.

9. Acting over a span of many decades – What are the biggest changes you’ve noticed in the entertainment industry? What changes do you think still need to be made?
I think I can sum up the current state of our industry by saying that it encompasses the good, the bad and the ugly – When I returned to the business, it seemed to me that much of the personal connection was now missing – no more Casting Director ‘Meet and Greets,’ no meetings just to get to know you and talk about your work and your aspirations. I understand that there is a huge talent pool now, but I miss the individual attention. And I also miss the amount of money we used to be paid for ‘national’ commercials LOL! The good news, however is that in this new Digital environment we have the ability and means (Indiegogo, etc.) to self-tape auditions and create our own content, allowing us to be creative and productive to an extent that was unheard of. We no longer just have 3 networks to work for, so the width and breadth of opportunities is much deeper. And we also now have a greater pool of independent talent in front of and behind the camera with whom to work and create. What changes should be made? Ask me again after we return from the pandemic… 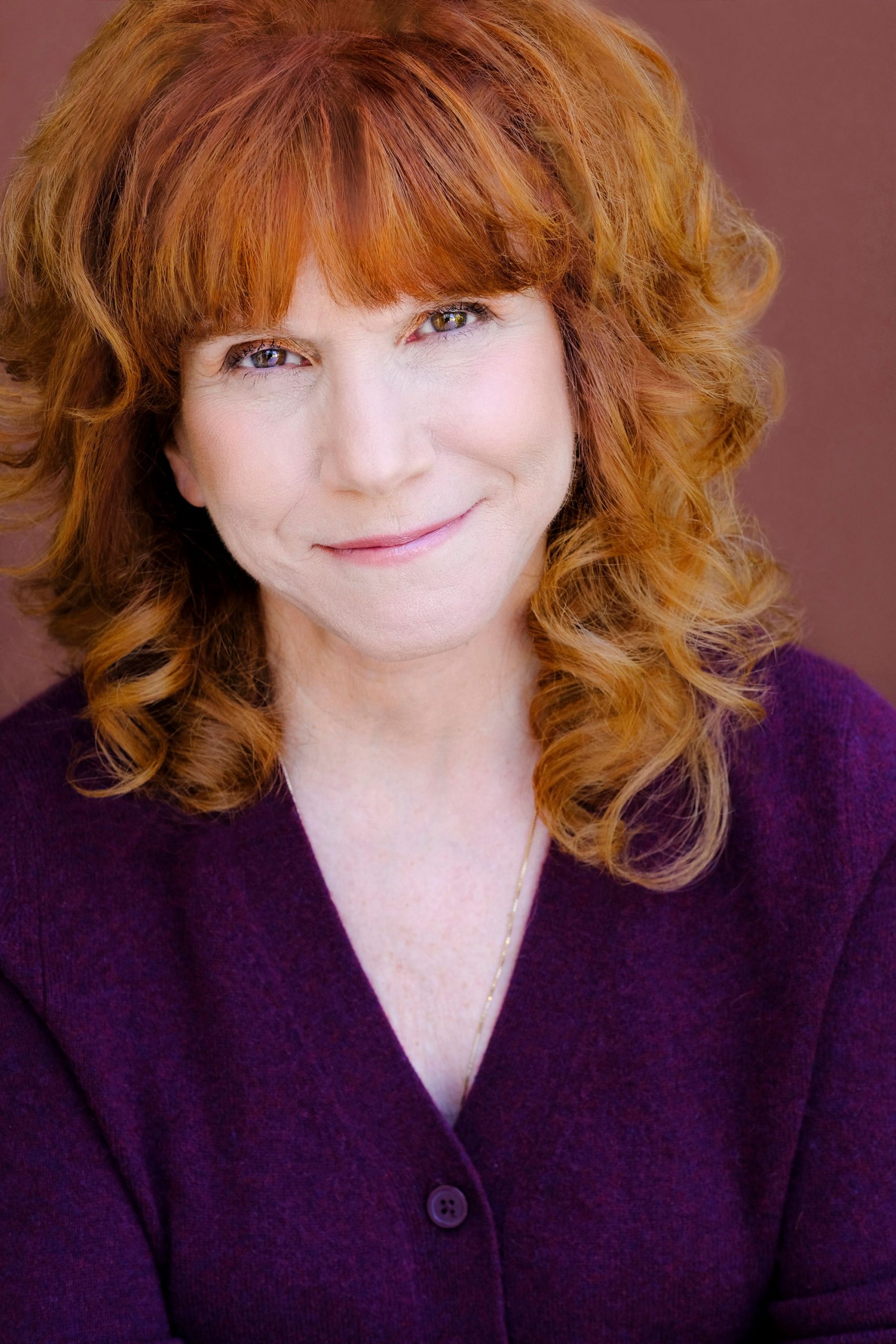 10. What does the future look like for Marcie Barkin?
I’m the eternal optimist, so I suspect my future will be fabulous… if I can just get out of self-isolation in my apartment AND Hollywood figures out a safe way to start production. This will no doubt be a new era for the entertainment industry, but we survived talkies and streaming channels and so much more, that I’m confident the need for people to be entertained will keep us in business.

I have great admiration and respect for veterans like Betty White and Helen Mirren who have spanned the decades, and risen to the challenges that inevitable change brings. I’m in a position to play parts that wouldn’t have been available earlier in my career – and in new formats. I’m anticipating a future filled with unique parts, working with creative people both established and new, bringing what I can to worthwhile projects. And being with Chris is my perfect home base – I’m confident that together we’ll surf the waves of this insane business. I’m so happy to be back.