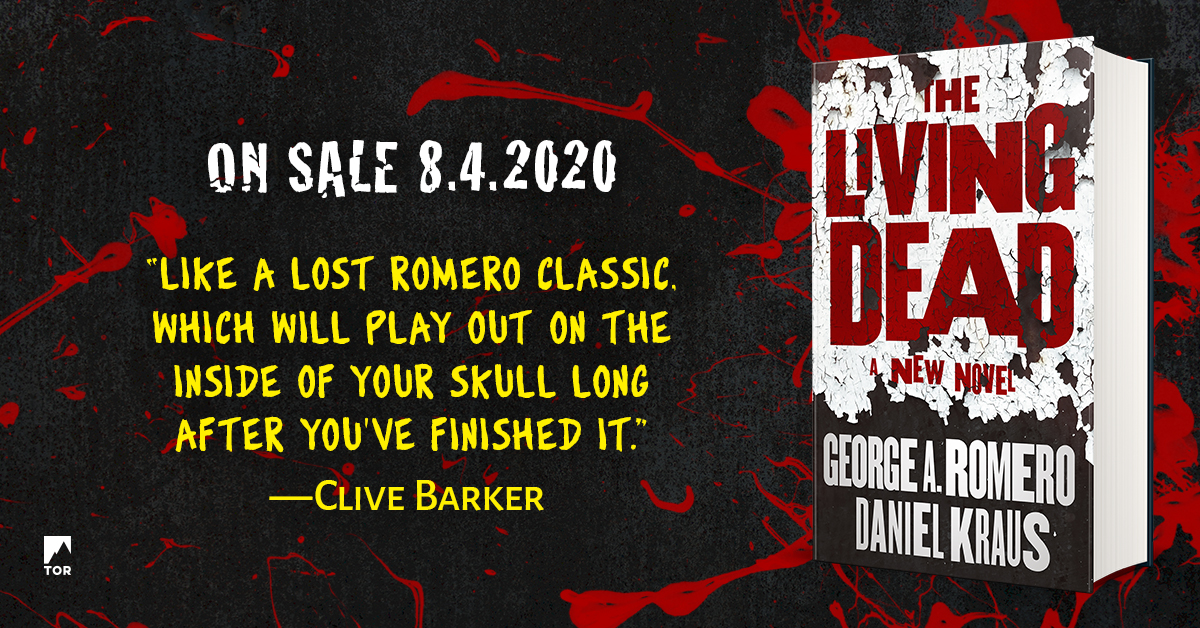 George A. Romero is known as the “Father of the Zombie Film” all beginning with his 1968 film Night of the Living Dead. Since then, Romero has written and directed dozens of films. Later in his life, Romero turned to fiction as to rid himself of the constraints of filmmaking. At the time of his death, The Living Dead was an incomplete novel.

Over the past three years, Romero’s longtime manager and friend Chris Roe worked together with Romero’s widow and the Romero Estate in order to see the book through to completion. Enter Daniel Kraus – co-author with Guillermo del Toro of both The Shape of Water and Trollhunters. Kraus and Roe knew each other from high school, and Kraus was honored to be asked to complete Romero’s work.

We have both Chris Roe – George A. Romero’s longtime friend and manager – and Daniel Kraus – co-author of The Living Dead – to answer questions. The Living Dead comes out August 4th.

1. While George Romero is known as the “Father of the Zombie Film”, it’s been said that he felt constrained by filmmaking at times, and turned to fiction later in life to fully tell the story of the rise of zombies and downfall of humanity. As Romero’s manager for over fifteen years, how long had he been working on this book?
George started working on ideas for this book in 2009.  I put together a two book deal with a publisher, and they made a great offer.  George didn’t want to feel pressure from the time constraints, and decided to just write the two books and turn them in.  Unfortunately, George had a stroke in 2010 and it just derailed everything.  He made a full recovery a few years later and slowly got back into a groove with it, and figured out his story after spending his down time doing research.  He continued to tinker with it until he passed. He was planning to complete it in 2017.   At the point of his passing, the story had gone through many changes and rewrites.  But he was on track with a great story that Daniel ultimately was able to finish.  Between his chapters and notes, about 50% of it was complete.

2. What inspired Romero to approach the zombie genre from a new direction?
George was always thinking of new ways to talk about the human condition using his zombies.  I saw and heard him talk about so many different ideas.  He was a true genius.  He could insert social commentary into anything.  It was one of his consistent contributions.

3. After Romero’s passing in 2017, with the book unfinished, when did you decide to pursue avenues to complete his last work? What was this process like?
After George passed we looked at what was in his treasure chest.  What was written fully and partially.  We also had to look at other attachments.  Meaning, did anyone else have ownership to those various projects.  Were those people involved in the development.  I knew immediately that the book was free and clear of attachments.  It seemed to be the easiest property to do something with.  It wasn’t complete, but George had made a good start on it finally in 2013.

4. While you and Daniel Kraus knew each other back in high school, when did you decide to approach him about The Living Dead? How did it all unfold?
Daniel and I knew each other back in high school.  We both went to Fairfield High School, in Fairfield, Iowa.  Daniel was a year behind me. His sister Jennifer was in my class.  I never kept in touch with Daniel once getting out of school.  We were not close friends, but knew each other well.  Sometime in 2005 I think we reconnected, he reached out to me.  He saw that George was making a personal appearance outside of Chicago.  I said  I’d love to introduce him to George, and made the invite to come to our hotel.  George had really gotten sick that weekend with a bad cold.  But I was able to introduce the two in between our commitments.  I remember Daniel being very happy. It was nice to see someone else escape Fairfield, and go out and have a career in this business.  I was happy for Daniel’s success.

5. What do you hope this now completed novel adds to the George Romero legacy?
I hope that it continues to show George’s genius and talent.  George was a pioneer in this business.  Pioneers never really get the respect they deserve.  They get credited for breaking down doors, but financially, they rarely get rewarded for their contributions.  George is the only legendary modern horror director with a star on the Hollywood Walk of Fame.  Carpenter, Craven, Hooper, none of them do.  We have a lot of things in the treasure chest.  I hope some get to see the light of day.

1. Growing up, you had been a huge fan of George Romero. What about his work interested and inspired you? What was your favorite project of his?
I grew up on George Romero like some kids grew up on Star Wars. Part of it was simply that my mom loved Night of the Living Dead and passed that love on to me. But his ideas excited me in a way that no other artists’ ideas did, and they stuck to me like burrs. George’s movies taught me to think about art as metaphor, and that was hugely influential in both my personal and artistic growth. So Night was my favorite, but I also became obsessive about Day of the Dead and Creepshow. I don’t think he ever made a bad film.

2. When Chris reached out to you about finishing one of Romero’s uncompleted works, what was your reaction?
I was stunned. It was beyond belief. I still don’t fully believe it. To be a part of this world that affected me so greatly, it’s like the closing of a lifelong circle.

3. You and Chris went to the same school together.  What was it like working together all these years later?
Yes, we went to the same small-town high-school in Iowa! The idea that we both ended up in the entertainment industry, and then circled back together decades later, is pretty incredible. Honestly, it makes me feel proud — proud of Chris and proud of myself. There wasn’t a lot of effective support for the arts in small towns back then, so success in the wider artistic world required a lot of resolve, energy, and self-sufficiency.

4. While you have written many novels on your own, and even gone through the process of co-writing a book with award-winning film directors, how was this experience different? What was your process like?
Not having George around to bounce ideas off of made each decision I made feel more weighty. Thankfully, I did months of research getting myself inside George’s head, had many fruitful discussions with Suz Romero and Chris Roe about George, and had the benefit of a lifetime of studying his work. The biggest challenge was connecting the dots in a way that felt natural and fluid. George’s material included pieces that belonged at the start of the book, the middle, and the end, so I had to build bridges — and sometimes very long, complicated bridges.

5. What did you feel was most important to get across while writing The Living Dead? What do you hope fans take away from it?
George’s manuscript really came alive when he was writing about people, their backstories, and their moral grayness. He believed we were all shades of gray, none of us completely good, and he never gave his characters an easy way out. His larger message, of course, remains that Americans continually fail to band together in a crisis — we see that in his movies, we see that in America’s response to Covid-19, and we see that in this novel, and I took pains to highlight it.

6. What does it mean to you to contribute to the legacy of someone you’ve long been a fan of?
It’s hard to call it a dream come true, because it is BEYOND any dream I ever had. I wasn’t just a fan of George Romero. He was a father figure to me, a teacher, a guide. He made me into the person and artist I am, and to feel like I’m paying that back to help get his epic novel over the finish line fills me with joy every day.