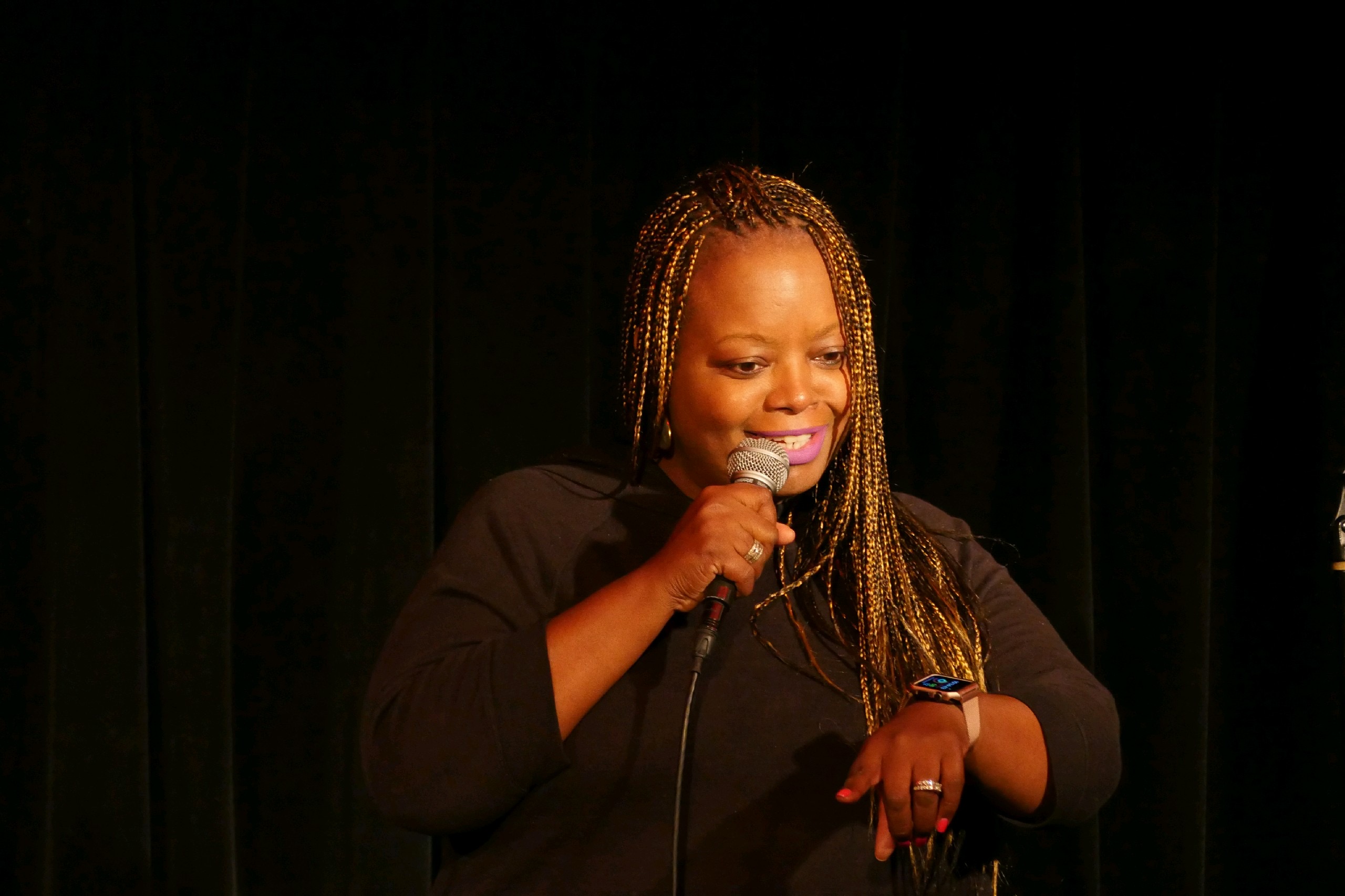 A woman of many talents, our June Spotlight features CRM client Alycia Cooper. While she got her start in stand-up comedy, Alycia has credits on hit network TV shows and blockbuster films alike. She’s also written and directed her own short film. We’re thrilled to have her.

1. While you have since opened comedy shows for names like Dave Chappelle, George Wallace, and Whitney Cummings, starting out you had to “earn your dues” by performing in some comedy clubs all across the country. What was this experience like?
Being an opening act is a right of passage for all comics.  I had a great experience on the road.  You learn something from everyone you work with.  You also gain exposure to their fan base, and if you work it right, you can capitalize on this aspect of your career as well.  Lastly, you stay in some really nice hotel rooms, and you perform is some fabulous theaters.

2. How did you find your comedic voice? How would you describe it?
It took me about six years to find my voice, which is the same amount of time it took me to gain the confidence that you need to succeed in stand-up.  I would describe my voice as brash, yet intelligent and palatable.

3. You’ve performed on many big stages throughout your career (America’s Got Talent and Last Comic Standing just to name a few). How do these performances differ from your sets at smaller venues?
The network shows bring network stress.  The bigger the audience, the more you worry about not doing well.  In a smaller venue, if you have a bad set, oh well, but on a global platform, one bad set can tremendously stall your career.  In the early 2000’s when Last Comic Standing first premiered, there were no social media platforms.  Today, if you bomb, it’s on YouTube forever.  Your grandkids, grandkids will be able to watch your dead ass.

4. Not just a comedian, you’ve also landed acting roles in hit network TV shows and voiceover work in blockbuster films. How has your background in comedy influenced your career as an actress?
Comedy has been the biggest gift to my acting career.  Stand-up prepares you for all other forms of entertainment.  A main benefit is that you’re not afraid to perform in front of others, whether it’s in an audition room, or on a set.  Two, you have to be authentic to be successful as a comic.  An audience can smell inauthenticity and it will keep them from being able to laugh at your material.  This same skill works well in regard to the depths comedians are able to go to in their dramatic works.  Several comics have won Oscars for drama.  Great comics have myriad performance levels they can pull from.  I’ve been fortunate to have been a part of some well- regarded projects, including voicing several roles in the blockbuster movie, “Spiderman:  Into the Spider Verse” which has grossed over $376 millions dollars worldwide.  It was my stand-up comedy background that helped me nail the audition.

5. Last year, you were a series regular on Poz Roz. What was your favorite thing about playing Michelle?
I really enjoyed the role of “Michelle,” because although our life experiences were vastly different, I could still relate to her.  She wasn’t me, but she was a collection of close friends of mine.  I also liked her free spirit, no-nonsense, blunt way of showing up in the world.

6. What would your dream acting role be?
My dream acting role would be the opportunity to play a diabolical character who doesn’t give a damn about what anyone else thinks.  I would really love to be mean on screen, just unlikeable.  But, sneakily unlikeable.  Like sweet in your face, but wretched behind closed doors.

7. Earlier this year marked the premiere of Trade, a short film you wrote and directed. What was the process of creating this film like?
“Trade” was a labor of love.  It’s what I would imagine child birth to be like.  Several months of pain, but in the end, it was all worthwhile.  Writing, directing and producing an independent short film is a ton of work.  You can look at the end credits to see all the people and locations it took to pull this thing off.  I wanted “Trade” to be my feature directorial debut, but I knew that I would never be about to raise the amount of money that it would take to do it properly.  So instead, I wrote it as a short, and crowd funded in order to make this film.  Crowd funding is a special beast in and of itself.  While I was crowd funding, we began casting.  I had a hand in every step of making this dream a reality.  We shot five days of footage in three days.  I averaged four hours of sleep each night.  We got it done.  Then, after filming, came the editing, then the color correcting, then the sound editing/ mixing, etc.  It took sixteen months to complete this film.  I’m very pleased with the outcome.  I was already a member of the Director’s Guild of America, having been a television field producer, but this was my first foray into directing a narrative.  I am very pleased with the outcome and proud of what myself and my team achieved.  The final product is currently airing on UrbanFlix.TV.

8. Your next short Just Us, is in the pre-production phase now. Are writing and directing things you see more in your future?
Yes, I plan on transiting to writing, directing and producing my own projects and giving myself acting roles in them, like Spike Lee did in his early days.

10. What does the future look like for Alycia Cooper?
Well, this Covid-19 thing has put a lot of things in perspective for me with all this forced free time.  I didn’t realize how my running around I was doing daily until I was forced to stay at home.  The county is now forever changed, and I’ll have no choice but to adapt like everyone else.  Maybe one day, I’ll be a business owner, living down south somewhere, where the cost of living is cheaper.  Whatever I end up doing, I’ll make sure to keep myself thoroughly entertained.