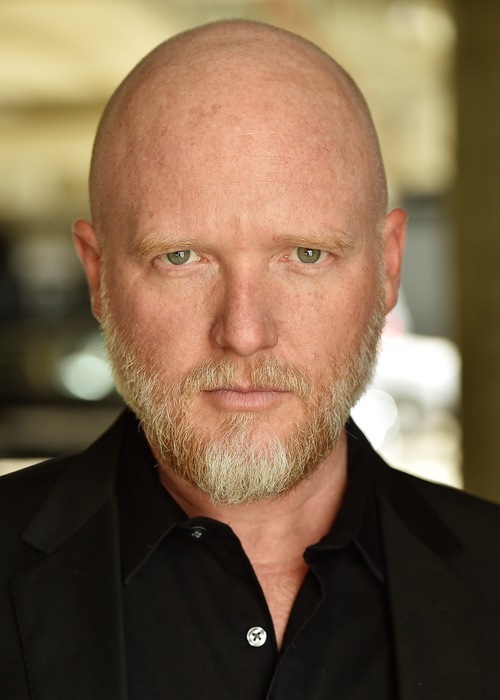 Steve Humphreys is a South African actor best known for his roles playing tough-guys on New Girl, American Crime Story, Justified, and Ray Donovan; as well as his many roles on the stage, in independent film, and in video games.

1. Tell us a bit about your childhood and where you grew up?
I was born in London and grew up in South Africa. Moved to the US at 11.

2. How did you get interested in acting?
My first play was Cinderella at 6 years old and I’ve been hooked ever since. Acting still brings me the same joy all these years later.

3. What made you decide to come to the United States?
Like most immigrants, my parents wanted a better life for their children. Living in apartheid era South Africa was dangerous and my father had the opportunity to transfer to Los Angeles with his company.

4. You’ve received training form Beverly Hills Playhouse, and Shakespeare at Antaeus, have a B.A. in Theatre from CSU Long Beach, why was it important for you to be classically trained?
Theatre has always been my first love and performing live is the closest you will ever get to an audience as an actor. You know instantly whether they are with you or not. I’ll never forget playing the villain in a play for Danny Glover’s Robey Theatre Co about the Haitian revolution and having the audience yell out during my performance because I was tricking the main character into surrendering. I feel like my vast classical training has given me the tools to handle anything that is thrown at me as an actor.

5. In 2011 you landed a co-star role in the hit FX show Justified, do you feel as though this was a big jumping off moment for you?
Honestly, booking Justified was one of the most pivotal moments in my career. I had a day job at the time and it was becoming increasingly difficult to get away for auditions during the day. I had previously auditioned for Justified something like 9 times and to be honest was over it. Feeling like it was a waste of time, I barely looked at the lines and booked the job. It was a glorious experience working with Emmy Winner Jeremy Davies and Walton Goggins. They reminded me why I love acting so much and since at the time Justified was one of the hottest shows on TV, it opened a lot of doors for me.

6. You often play characters that are very tough, angry and rough around the edges like the Aryan skinhead “Erik” in S.W.A.T., Paul in Franklin and Bash, or the Road Rage Guy in New Girl, what about you as an actor lands you these roles?
I love playing villains. I think the key is understanding what makes them tick and being willing to expose their ugly side is the key to tapping into these kind of characters. Nobody thinks they are a villain, they always have justifications for the way they act.

7. Especially as someone who moved to this country, is it fun to get to play the American redneck, Aryan Gang member, Hard-Ass type?
It’s always pretty funny to me that I get cast that way since people that know me always tell me that these characters are the complete opposite of me but playing the villain is always the juiciest role.

8. How do you get yourself amped up for these roles, such as on S.W.A.T. and Etheria?
Music always helps, I often make character specific playlists to get me into the scene prior to shooting. I played an SS officer in the feature film Miriam a few years ago and found listening to Rammstein got me ready for my scenes, especially since all of my dialogue was in German.

9. You’ve done some great voice work for Warner Bros. ADR on films like Invictus, 300: Rise of Empire, and Hereafter. How did you get involved with this?
Since I’ve lived all over the world, I can do the accents from every place I’ve lived and have a good ear for other accents. Most of these projects for Warner Brothers wanted authentic accents so I’ve been lucky to work for them repeatedly.

10. You’ve also worked on Red Dead Redemption. What is it like being involved with a video game?
This was such a fun experience, I had plans to go out of town so of course got the booking last minute and had to cancel my plans. It was also motion capture so I had to wear a headpiece with cameras mounted to it so they could capture my face for the game. I definitely feel that having a background in theatre is very helpful for acting in video games.

11. When did you move to New York City? What was the reason for the change?
I moved to NYC 3 years ago to continue pursuing theatre. Thankfully there is a vibrant film and television scene here and for the most part I’m still able to self tape my auditions that I get from LA so it feels like a win/win.

12. You’ve had a long history of acting in theater productions, why is it important to you to continue acting on the stage?
It’s said that theatre is an actor’s medium, I find you have the most control over the finished product. I enjoy the interaction with the audience and the fact that every performance is unique.

13. Most recently you were in a new play called Shadow of Heroes in New York, can you tell us about that experience?
This was fantastic experience of a rarely revived play about the Hungarian revolution for the Obie award winning Metropolitan Playhouse in the East Village.

14. What’s up next for you?
I shot a feature film in Buffalo with Patrick Flanery & Weston Coppola called Assault on VA 33 and have a show called Murderville premiering on  InstaMiniSeries on Instagram.