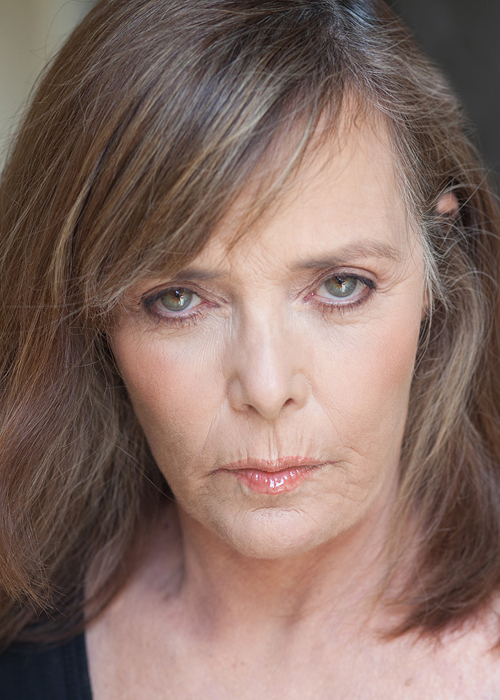 Our October spotlight features a true Horror Movie Guru, Eileen Dietz, best known for her appearances in many horror films such as the face of the demon in The Exorcist and for her portrayal of characters on the soap operas Guiding Light and General Hospital. Here she reflects back on a career that has spanned decades and looks ahead to some upcoming projects.

1. Growing up in New York City, you were first introduced to acting alongside your twin sister Marianne DeFossey, acting in various commercials. What was this type of childhood like? Did your parents push you to pursue this career?
My Dad worked in advertising. A print job came up and they needed babies for a detergent ad. He used my me, my Mom and my twin sister Marianne for the ad. And that was it for Marianne and my Mom.  My first memory of wanting to be an actress was when I was 7 years old. Marianne never was interested in the performing arts. My Mom took us to see a Broadway presentation of PETER PAN and we were seated in the first row of the balcony in the theatre.  I thought that if I jumped onto the stage, I could be one of the lost boys in the show. But then I thought if I missed the stage I could fall into the audience so I nixed that idea and fell asleep.

2. Your TV debut came at the young age of nineteen in a small guest-role in The Doctors. What was this first experience like?
My first TV role, The Doctors was really scary. I had only one line and I kept repeating it to myself over and over until it was time to shoot. I thought I would forget the one line but it was fine and led to me working on other soap operas with loads and loads of dialogue. A study in contrasts.

3. In the late ’60s to early ’70s you acted in many theatre productions – Steambath and Ontological Proof of My Existence – to name a few. With a background in theatre, what was it like being able to flex these skills on stage?
I loved doing theatre in NYC. I acted in Steambath with Tony Perkins and Hector Elizondo and it was a hoot. We changed the lead three times and Tony ended up playing the lead himself. The only reason I got cast was because they had fired the other girl and needed someone right away and I was available on a Sunday afternoon. Taught me to this day about always being available by phone and in person. Acting in Ontological Proof of My Existence led to me being cast in The Exorcist  Agents saw me in the show and called me the next day and asked if I would like to audition for a film called The Exorcist and the rest as they say was history.

4. In 1973, you were cast in The Exorcist. What was this casting process like?
The casting sessions for The Exorcist were intense but lots of fun. I met with the casting director, Juliet Taylor, and she handed me the Exorcist novel to read and asked me to come back and do an improvisation for her. I read it feverishly and of course it knocked my socks off. But how was I to play a demon?  I ran to the library and got pictures of wild animals, went home and turned off the lights and lit candles and proceeded to roar and growl. Went back to casting and did an improvisation of both Pazuzu and the little girl in a possession scene. Casting loved it but wanted me to lose a few pounds (I was very thin and androgenous but the little girl I was to possess was even smaller) . I wrapped myself in saran wrap and peddled my bike around Central Park for days to lose the weight.  After the next casting session, I was asked to meet Billy Freidkan the director, Dick Smith, the Godfather of makeup and Linda Blair who was to play Regan. Shortly after that I went to Dick’s studio, an adventure in itself, and he made a cast of my face to see if I could look like the demon possessed Regan. I then did a screen test and again played Pazuzu and the little girl on the bed and the crew brought out a foot long paper mache crucifix to act with, haha.  I got the part.

5. At the time, did you know how influential the film would be? What do you most enjoy about being a part of such a legendary film?
We had no idea that THE EXORCIST would be such a big hit, the scariest movie of all time. We thought we were just making a horror film. They closed the set and swore everyone to secrecy.  Even Dick Smith was not allowed to take photographs.  They would not let anyone in the theatre once the film began.  Long lines ensued which the press picked up and printed photos of people waiting to get in. The press also reported people vomited and fainted in the aisles. The reviews were fantastic, The Exorcist became a bona fide hit. I am proud to say my portrayal of the demon Pazuzu became the scariest part of the film. One of the best things about acting in projects is to make people feel something and for audiences to be able to relate to the characters you are playing even if you scare them to death.  And how wonderful that The Exorcist is still the scariest movie of all time decades later.

6. After almost 50 years and so many credits, your role as Pazuzu is still one of your most well-known parts. How has The Exorcist shaped your life and career?
First and foremost, shooting The Exorcist, many, many years later, led me to Chris Roe, my manger. He totally reshaped my career.  He also introduced me to horror conventions and I have guested in shows in throughout the United States and in the UK, Germany and Spain. None of this would have happened without The Exorcist and Chris despite my early acting credits.

7. After the success of The Exorcist, you landed many guest-star roles during the late ’70s. Including, but not limited to, Planet of the Apes, Korg: 70,000 B.C., Barnaby Jones, and Happy Days. What do you remember most about this string of your career?
I had so much fun acting in the 70s and the 80s.  Planet of the Apes was the first film I shot in LA after I left NY and I fell in love with Roddy McDowell who played an Ape. HAPPY DAYS was just well, happy, and our show turned out to be one of the most popular shows ever shot. Helter Skelter was a dream come true as I played one of the murderous members of the Mason gang. In BARNABY JONES I performed a swan dive off a high board, (yeah right, they doubled me) Being an actress has also given me many perks and adventures. I especially enjoy going on location. I shot in the Bahamas for a Soap Opera, where I learned to scuba dive and then my character drowned. And I was off the show, oh well.  I also shot in Turks and Caicos where I wasn’t allowed to scuba dive because of insurance prohibitions. But my husband was invited down for a week and he swam with sand sharks and sting rays. No insurance prohibitions for him. But I got to play an apparition from the 1860’s with only one eye and a huge antebellum dress.

8. In 1980, you landed the recurring role of Sarah Abbott on General Hospital. What was this experience like? What was your favorite thing about the role?
Sarah Abbott on General Hospital was one of my favorite roles. I played a girl in a mental institution who carried a doll because she decided not to grow up.  Sarah was sweet, vulnerable and messed up and Heather, my roommate was a mean and conniving psychotic. We became the 2nd most popular duo on the show, next only to Luke and Laura. General Hospital became the most popular Afternoon Drama ever and often had up to 14 million viewers. VHS hadn’t taken hold yet so business people and housewives would arrange their schedules around General Hospital. Colleges around the country were holding viewing parties from 2-3 PM.  I requested not to wear “soap opera makeup” because Sarah was in the mental hospital and I  because of that viewers could relate to me unlike other actresses who wore full makeup even to go to the store. I was often asked if I was ever in a mental hospital.(ha, ha, insert your own joke here)  But most of all it was the work. Sarah expressed every emotion on the spectrum and often went from sweet and loving to paranoid and homicidal in a matter of seconds.

9. Over the course of your career, you’ve amassed dozens of credits in indie horror films. What draws you to these projects?
Because of The Exorcist I have been asked to be in a multitude of horror films.  I love shooting horror and thrillers and am quite happy acting in this genre. Whether the roles are demons or witches or zombies or vampires or psycho clowns I love scaring people. I am also often cast as victims and love making audiences feel sad and cry. I also love finding places where victims can feel hopeful.

10. Most recently, you just finished filming a project Clown Motel 2. What was this experience like?
I just wrapped Clown Motel 2, I played The Queen of Clowns. Playing her was challenging and unlike anything I had ever shot before. She was royal, regal, bitchy and vulnerable, tears running down my face. We were in the desert and in desert caves and it was often 112 degrees but we did not care. One of the wonderful things about filming Clown Motel 2 was that the cast and crew and director were totally committed to shooting the project in the middle of nowhere, without a lot of money or accoutrements. A shout out to our Cinematographer Gary Ott and to Joseph Kelly the director and writer and Angie Joseph, Executive Producer and Summer Twins Productions, for asking me to be in this project.

11. What does the future look like for Eileen Dietz?
Unicorns and rainbows. 😊 Live, love, laugh and be happy.

Next up is The Bleeding Dark, a project that is very close to my heart. It is a thriller shooting in Portland. I have a fabulous part. It tells the story of what happens after a home invasion where a killing ensues, the despair, the guilt, and the grief. I sat in shock for 15 minutes after I read it. Then I am shooting a Sci Fi film, Obscura and a Vampire film Appetite for Sin both in the fall. After the New Year, I go to England to shoot The Callback. I have several films about to be released before Halloween:  The Amityville Harvest, Rot, and The Dark Offerings.